Many women who are contemplating their “first time” have many questions about bleeding after losing virginity. Is there a lot of blood? Where does the blood come from? Does it hurt? How long do you bleed after losing your virginity?

You experience bleeding after their first time because of a break in the hymen. The hymen is a very thin membrane that partially covers the vaginal opening. Almost every female is born with a hymen, which starts out relatively thick and thins over time, mostly due to activities such as using tampons, playing sports and the like. But even when a woman loses her virginity in her later years, the hymen might still lead to bleeding after her first time. 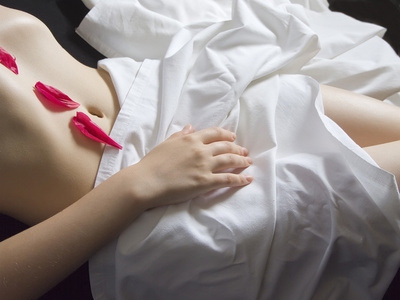 When a woman loses her virginity, she might notice anything from no bleeding at all to a great deal of bleeding; however, it should not be as much as a period. Most women will experience very light spotting for a few hours after they have sex for the first time. It is important to remember that bleeding during sex – or not bleeding – doesn’t mean a woman is healthy or unhealthy. It is just a natural response to how much of a hymen is there.

Many women might expect to see the same amount of blood as they do during menstruation, but this rarely happens. Most of the time, blood from menstruation is heavier and lasts much longer, and is accompanied by cramps, mood swings, and all the other symptoms that often go along with the menstrual cycle. Bleeding after losing virginity doesn’t have any of those symptoms.

How long do you bleed after losing your virginity?

The good news is that it lasts only a few hours at most. Some women think it’s just enough to stain a panty liner, while others experience a bit more. Again, it depends entirely on how thick the hymen is when you have sex for the first time.

If you are bleeding very heavily, a continuous flow for several days, or you are in severe pain, it’s time to see a doctor. Keep in mind that this complication is extremely rare, and usually is a signal of an underlying problem.

Many women have said that losing their virginity is painful. How painful it is varies from one person to another. Some women experience a sudden, sharp pain and then nothing else. Some experience an aching sensation. Others might experience no pain at all.

How to relieve the pain

There are ways to minimize the pain that you might feel during your first time. The most important way to do this is through a great deal of foreplay. The more turned on you are, the more lubricated your vagina will be, and that will make penetration much less painful. Foreplay will also help your body get used to being touched.

Being relaxed will also help minimize pain. It might seem counterintuitive, because when you are turned on you certainly don’t feel relaxed! But when you are scared of what will happen, your body tenses up, and this means that penetration will be more difficult. The more relaxed you are, the better. So always take it slow and remember that you can stop at any time.

Bleeding After Losing Virginity: What Others Experienced

Bleeding after losing virginity is normal, and a lot of women experience it. Take this particular story from a woman who recently lost her virginity:

“I won’t lie to you – I was scared to death. But I was very much in love with my boyfriend and I really wanted my first time to be with him. I knew he would be very careful and gentle, and he was. The trick was to get really turned on first, and so he took hours to just play with me and get me ready. Then when I was ready to go, it was actually nice.

It did hurt a little, but not like you might think. It was a feeling of pressure, then a little sting, and that was it. I was so distracted by the pressure that it was hard to get into the pleasurable feelings of it. The second time we did it, though, I enjoyed that quite a bit!

As for bleeding, there wasn’t much. I used a panty liner for a few days just to be safe, and there was some spotting, but not much at all. It wasn’t really enough to bother me. Some women might have more bleeding, but most of my friends had a similar experience with little blood.”