Even though they are one of the most common ailments around, Upper Respiratory Tract Infections, or URIs, are one of the least understood. Even though almost anybody will get one sooner or later, few of us understand these infections or what causes them.

We need to be aware of respiratory tract infections because they are extremely common. Available statistics indicate that the average child will get five such infections a year and the average adult will suffer from two to three URIs each year.

What Is an Upper Respiratory Infection?

A URI occurs when a virus or a bacteria infects all or part of the upper respiratory tract, which consists of the nose, sinuses, pharynx, trachea, and bronchi. These are the areas through which air enters the body and travels to the lungs. These infections can be very serious because they sometimes spread to the lungs.

Most URIs are caused by viruses, which means that they cannot be treated with antibiotics. There are around 200 URI-causing viruses, most of which spread through the air. The two most common URI viruses are the common cold (rhinovirus) and influenza (the flu). The typical symptoms of a URI are usually caused by an allergic reaction to the infection itself.

Influenza is the most dangerous URI. Health authorities estimate that it causes 40,000 to 60,000 deaths a year in the United States. Other serious URIs include pneumonia and bacterial infections such as streptococcus (strep throat). Even though some URIs can lead to serious medical problems, most are minor ailments that clear up quickly with bed rest and other minor treatments. 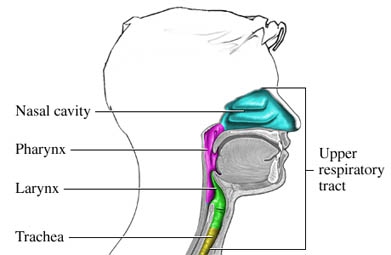 What Are the Symptoms and Complications of Upper Respiratory Infections?

Even though there are many causes of Upper Respiratory Infections, the symptoms are pretty much the same. That makes these contagions easy to recognize but dangerous because it is easy to confuse a dangerous one with a minor ailment.

When to See a Doctor

Each year many people become seriously ill and sometimes die because they mistake a serious URI for a minor ailment such as the common cold. These people could avoid dangerous complications by simply seeing a doctor.

Seek medical treatments immediately if one of the following circumstance take place:

What Are the Risk Factors for an Upper Respiratory Infection?

The Main Risk Factors for URIs Include:

People that fit into any of these categories are more likely to catch a URI and more likely to suffer serious complications from one. Fortunately, some of these risk factors can be mitigated or eliminated with a healthy lifestyle in good habits. Simply stopping smoking and washing your hands a few times a day can greatly reduce your chances of getting a URI.

What Are the Treatments for an Upper Respiratory Tract Infection?

The good news is that most upper respiratory tract infections clear up after a few days. A healthy person’s immune system should be able to fight off a URI fairly quickly.

Fortunately, there are some things you can do to strengthen the body’s defenses and speed up the recovery process. There are even some effective home remedies for URIs:

If home remedies fail or the upper respiratory tract infection gets worse, you should seek medical help as soon as possible. Serious URIs can sometimes quickly develop into life-threatening ailments.