The Portrayal of Teens in the Media:The Truth

Introduction
Is the Portrayal of Teens in the Media Accurate?
Point 1

My English assignment this term was to write an opinion column in response to the following question: Is the portrayal of Teens in the media accurate? I was so passionate about the topic, and about 90-95% of it is emotive. Not many facts to support my opinion. Any way... 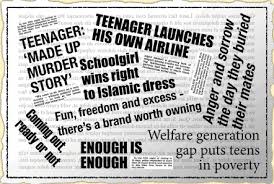 Is the Portrayal of Teens in the Media Accurate?

Did you know 75% of the media on teenagers portrays them in a negative light? This just goes to show how much of the world’s adult population demonises and dislikes teenagers.

Some may say that the Young Australian of the Year Award, awarded this year to Alijah McDougall, represents the majority of teenagers who are acting genuine and not stupid. However, that only stands for the exemplary Australians, not the average teenager.

“4 Teens Honoured for Positive Deeds in the Community”, “Hurray for Teenagers” and “Teen Girls Being Amazing Role Models” --these are the headlines that the media should be writing more about.

But they aren’t the headlines that sell papers. No one is interested in reading how a teenager is helping his or her community. Instead, content about juvenile crime or how inappropriate teenage behaviour is.

The impact this is having on teenagers is very clearly justified in their actions.

Teenagers are already dealing with drugs, alcohol, peer pressure and sex, while trying to work out their own unique identity. It certainly doesn’t help when they are portrayed negatively through the media.

Have you even considered the world from our perspective? You know, you were all teenagers once too.

Have you, as an adult, ever been asked to leave, because you were an adult? No? Well, my friends and I were riding our bikes and decided to purchase something from a convenience store. The minute we walked in, the manager said get out. That was just because we were teenagers.

That small minority of kids who are behaving badly are shaping the reputation of all of us!!! I am sick and tired of being treated the way the media stereotypes teenagers!!!

I’m pretty sure I speak for all teenagers when I say this: WE ARE WHO WE ARE AND IF YOU DON’T LIKE IT, TOO BAD! WE AIN’T GOIN’ ANYWHERE!

So who says that teens only care about themselves? Or who says they are doing what everyone thinks they’re doing? The media does and, what’s worse, the mainstream society believes it.