You will find a wide range of rum varieties to use in cocktails, making it hard to choose. Many rum cocktails require quality gold or light rum which is a good choice for a home bar. Dark rums should be your second priority as they are sometimes used with light rums in cocktails. Although flavored rums aren’t as essential, they can be helpful with specific cocktails or when it comes to adding flavor to a drink. 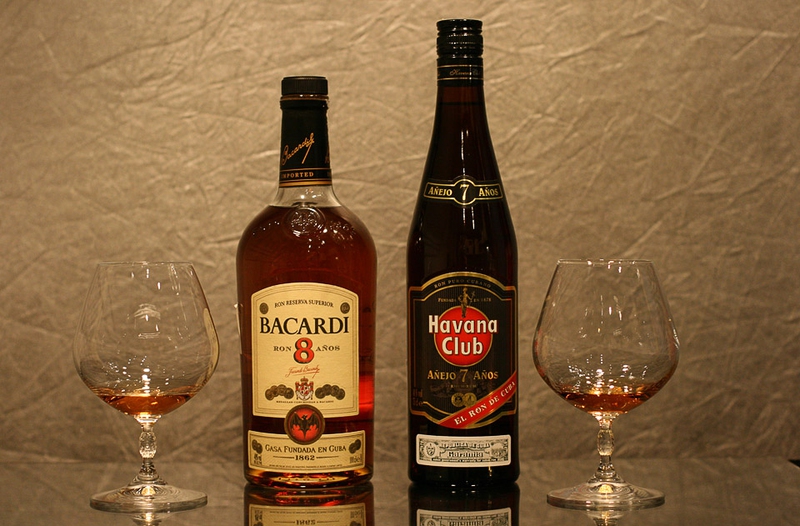 With its best-known brand rum, Bacardi is actually the largest of the family-owned, privately held spirits companies worldwide. The premium blend wasn’t available for public consumption until it got a commercial release during 2003 in order to celebrate the visitor center in the distillery. Before this, it was crafted just for Don Facundo Bacardi, the founder, and his family. Bacardi Reserve Limitada is made from the finest rums and aged between ten and sixteen years in American white oak barrels which are lightly charred. This produces a rum of deep reddish gold color with a smooth, rich taste, including hints of dried fruit, oak and vanilla.

This famous rum is produced by Diageo, an alcohol conglomerate. It gets its name from Sir Henry Morgan, the Welsh Caribbean privateer in the 17th century who died on August 26, 1688. The slogan, “To Life, Love and Loot”, has been used since 2011. Recently Captain Morgan has an used innovative strategy to challenge Bacardi’s popularity for white rum by releasing Captain Morgan White Rum. Last year they also launched a limited edition drink, Sherry Oak Finished Spiced Rum.

This rum is owned by United Spirits, an Indian drink company. Within million case sellers, this brand is growing the fastest, with a 7% increase in 2013 and moving from third to second place in 2014. The brand was first launched in 1991 when it just sold 100,000 cases. Since then, it has grown to become one of the top selling rum brands.

This is the brand and name of several rums produced by Brugal & Co., C. por A. Brugal in the Dominican Republic. This one with Bermudez and Barcelo, other Dominican rums, are referred to by the name the three B’s. There are three Brugal distilleries with two in San Pedro de Macoris and one in Puerto Plata. Brugal is the best-selling rum within Spain and the Caribbean, but it didn’t do as well as hoped within Southern Europe in the previous year. With the struggles, sales of Brugal in the US grew by 22%, largely due to markets in Chicago, Boston and New York.

The house of Radico Khaitan produces Contessa Special XXX Rum which is dark colored. This house is also famous for their 8pm whiskey. Contessa has a large share within the defense segment, which is the biggest rum consumer in India. This award-winning rum won a silver medal in 2008 at the Monde Selection and a bronze in 2007 at the International Wine and Spirit Competition based on quality. This is the only Indian rum produced with cane juice spirit and it tastes slightly of raisins. August of 2013, Radico said that their profits increased nearly 11% and this was largely due to Contessa rum and other premium brands.

The Havana Club rum is produced in Santa Cruz del Norte, Cuba. The brand was established by Jose Archebala in 1878 and following the Cuban Revolution in 1959, the Cuban government took the distillery and company, nationalizing them. After this, the Arechabalas moved to Spain before emigrating to the U.S. Following 1994, the rum began production by the Havana Club International, which is joint venture (50:50) of the Cuban government and Pernod Ricard. Although the rum isn’t sold to the United States due to trade sanctions, Havana Club is still one of the rum brands that is best-known worldwide.

This Venezuelan rum was first marketed in 1959 and is the top-selling rum within Venezuela. The Cacique product lines are part of Diageo which is the largest multinational spirits, wine and beer company world-wide. Cacique is a loan word from Arawak or Taino languages and in Spanish, it means “chief of the tribe.” This rum is available in multiple varieties ranging from Cacique Origen, Cacique 500 to the most expensive Cacique Antiguo.

Pernod Ricard is in charge of Montilla rum and despite stagnant (to slight) growth during the previous five years, there was 12% decline in sales, bringing the numbers down from 1.7 million to 1.5 million cases. Despite this, the rum still ranks higher in terms of sales than the previous year. This rum is mostly consumed in Brazil and still hasn’t regained its pre-recession levels or reached 2 million cases. The rum is named for the Spanish Montilla municipality and was introduced in 1957.

Gruppo Campari’s Appleton Estate shows steady sales during the previous few years, as they have remained at 1.2 million nine-liter cases sold each year since 2008. While other brands decline in 2014, however, this Jamaican rum finally enters the list of the top ten best-selling brands of the drink. In June of 2012, this distillery also released the oldest rum that is commercially available, known as the Appleton Estate 50 Years Jamaica Independence Reserve. A month after that, Campari, an Italian company, acquired Lascelles deMercado for $414.8 million, effectively transferring the ownership of the Appleton Estate rum.

Madira rum also declined significantly in 2013 as sales dropped from 2 million cases to only 1.8 million. This rum is owned by Tilaknagar, an Indian drinks group and the drop in sales was a shock after its 43% increase in volumes within 2012. Those impressive numbers had led it to being the fastest growing out of all rum brands for 2012 as well as the fastest growing out of spirits for the Brand Champions list.