Rheumatoid arthritis can be described as a chronic inflammatory disease that affects the joints of the feet and hands. This condition mostly affects the lining of the joints, which leads to a painful swelling that can result in joint deformity or bone erosion when left untreated. Being an autoimmune disorder, this condition happens when the body’s immune system attacks the body tissues by mistake. Apart from causing problems in the joints, this condition can further affect different body organs like the eyes, skin, blood vessels and lungs.

While this condition can affect people in different age groups, it mostly occurs among people above the age of 40, and is also more common in women. The treatment for rheumatoid arthritis is done to control the symptoms and to prevent joint damage. 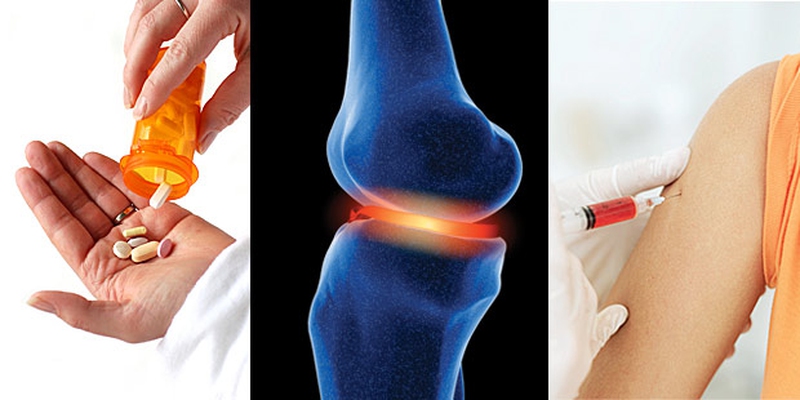 There are certain medications that can be administered to ailing patients to prevent the condition from worsening while at the same time reducing the risk of further complications.

These come in the form of tablets. When diagnosed with the condition, these drugs will be prescribed as part of the patient’s first treatment. These meds are effective in treating early symptoms and can greatly slow down the progression of arthritis.

DMARDs work by inhibiting the effects of the chemicals released when the immune system attacks the joint cells. This prevents further damage. DMARDs are available in different types including leflunomide, methotrexate, hydroxychloroquine as well as sulfasalazine.

In addition to the medication prescribed to stop the progression of the condition, one may need to take medication that stops the pain. Here are some of the various medications that can be administered to relieve the pain.

In some rheumatoid arthritis cases, paracetamol may be prescribed as a combination with codeine in a bid to reduce the pain associated with the condition. It is worth noting that these medications cannot be used to treat the main problem as they are mainly painkillers. Painkillers can be prescribed as you wait for your appointment to see a physician.

These can be prescribed alongside the painkillers or instead of painkillers. There are different types of NSAIDs such as naproxen, ibuprofen, diclofenac and COX-2 inhibitor drugs such as etoricoxib or celecoxib. The NSAIDs are prescribed as painkillers and also as medication for reducing inflammation.

These are powerful medications that reduce inflammation, pain and stiffness. They can be administered as tablets or injections directly to the painful joint or muscle.These medications cannot be administered over a prolonged period since long term use can result in serious side effects like weight gain, muscle weakness, easy bruising as well as skin thinning.

The doctor can also prescribe other treatments to deal with the condition.

This type of therapy makes it possible for the patient to improve their muscle strength, fitness and the flexibility of the joints.

Also, doctors may use heat packs or ice packs for relieving pain. A TENS (transcutaneous electrical nerve stimulation) machine is also used to send pulses of electricity to the affected joints. This numbs the nerve endings and can ease the pain caused by the condition.

This is administered to patients who suffer from rheumatoid arthritis as a result of their day to day tasks. The therapist offers advice and training that helps the patients to learn how to protect their joints while at home and at work. Splint support for the joints may also be recommended.

If the condition causes issues with the feet, this therapy can help. A podiatrist may recommend support for joints or insoles that relieve pain.

This is recommended in the event that the medications and therapy fail to stop the damage. The surgery can involve any of the following processes:

This process involves the removal of all damaged joint parts and the insertion of a prosthesis that is made of plastic or metal.

The damage that occurs to the joints and the inflammation can cause serious damage to the tendons. A surgeon can repair the ruptured or damaged tendons surrounding the joints.

A joint may be fused surgically to stabilize a joint or realign it. It can also be done to curb pain.

Complimentary therapy can be used to offer short term benefits in terms of fighting the symptoms.

It is yet to be medically proven that a change in diet can help a patient suffering from this condition. However, Mediterranean diets should be encouraged. These types of diets comprise of fruits, bread, white meat and less of red meat. The patient should consume less butter and cheese products and replace them with plant and vegetable oils instead.

There are certain exercises that can go a long way in helping to deal with rheumatoid arthritis. They include: