Can the Nub Theory Show the Sex of a Baby?

Introduction
Part 1
1 What Is Nub Theory?
2 Can the Nub Theory Show the Sex of a Baby?
3 What Do People Say About Nub Theory?

When you find out that you’re pregnant, one of the first thoughts that spring to your mind is whether it’s a girl or a boy. You may be eager to find out at your 20-week scan, or perhaps you like to keep guessing until the baby is born. However, if you’re looking for hints, you may just be able to guess the baby’s gender at the 12-week scan, using what’s known as ‘nub theory’. As long as the fetus is lying at the correct angle, you can look for the ‘nub’ – and this may give you some clues.

What Is Nub Theory?

The ‘nub’, a protrusion between the baby’s legs, is said to appear in all fetuses at around 11-13 weeks’ gestation. According to the nub theory, if the nub sticks up at more than 30 degrees, it’s a boy; if the nub is angled at less than this, it’s a girl. The nubs for girls may be almost horizontal, whereas with boys, the nub would be at a much steeper angle. If you’ve got your scan coming up, look for the nub – but remember that your baby has to co-operate. You can only get a good view of the nub if the baby is lying on his/her side.

Check out the following pictures to see the nuance. 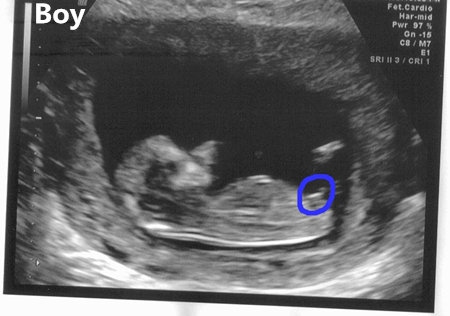 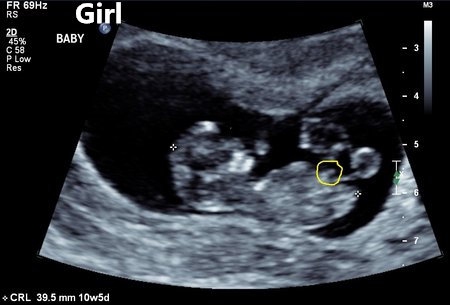 Can the Nub Theory Show the Sex of a Baby?

The nub theory is based on the premise that at 12 weeks’ gestation onwards, boys’ and girls’ genitals are positioned differently on their bodies. The genitalia are not properly formed at this stage, and both sexes have a small tubular protrusion called the genital tubercle. Nub theory advocates believe that if you’ve got a little boy, the tubercle, or ‘nub’ will be aimed upwards. Conversely, if you’re expecting a little girl, the nub will point horizontally. The 12-week-old fetus is very small, so to be able to see the nub on the scan, the baby has to be at a good angle when the images are taken by the sonographer. If your baby is kicking or turning their back on the sonography equipment at the time, you may not see the nub.

The nub theory has no solid medical research to back it up, but lots of parents insist that it works. However, you’re unlikely to get a confirmation or denial from the medical professional doing the scan. You may find it useful to compare your scans with those of another fetus whose gender is known, or those of a baby that has been born. Remember, it’s important to not take the nub theory too seriously and decorate your baby’s bedroom based on the results, as it can be wrong sometimes.

What Do People Say About Nub Theory?

“I absolutely believe in the nub theory. 12 weeks pregnant, and it showed me that I was expecting a boy – and I was!”

“I’m currently expecting a boy, and his scan looks exactly the same as that of my first child – a daughter.”

“When I asked my sonographer about nub theory, she said that you can’t tell the gender by the nub, as it can hang in either position. Therefore, it’s best to wait for your 20-week scan if you really want to know.”

“My first baby had a nub pointed upwards and was a boy. Now I’ve just found out the gender of my second and the nub theory was correct yet again!”

“I think that if you use the nub theory 12 weeks or before, it’s unreliable. It said I was expecting a boy, but I’ve just had a girl.”

“I was told I was having a boy at 13 weeks by a new technician, but at the anatomy ultrasound, they found out that it was a girl. Having said that, the doctor was testing the technical operators to see if they could predict babies’ genders at 13 weeks – most were around 80% accurate.”

“I’ve used the nub theory to correctly predict the gender of my last three children, and I’ve become really good at guessing. Remember that the baby needs to be at least 12 weeks (or preferably 13) gestation. So the technician can perfectly capture the midline shot, with the fetus’s back slightly uncurled.”

“The technicians at both of my 13 week scans said that my first was most likely a girl, and the second a boy. For a few weeks, I didn’t want to trust what they said, but subsequent ultrasounds confirmed that the technicians were correct.”