The Victoria’s Secret Fashion Show may have started out as a normal, everyday runway show for a mall store that sells sexy lingerie, but over the years it quickly grew into the feathered Mardi Gras parade we all know and love. 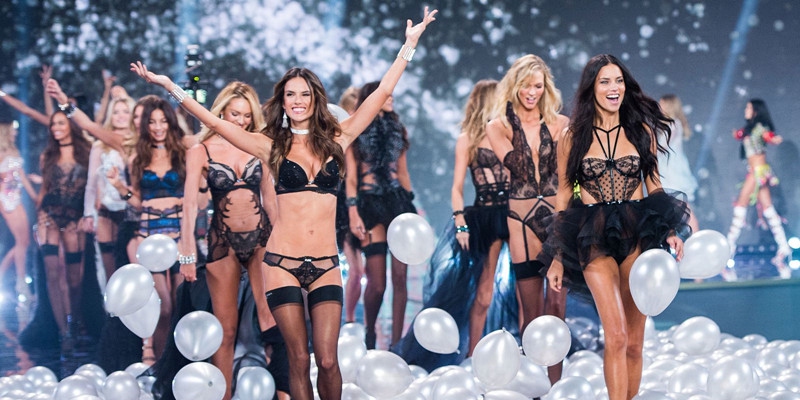 Victorias-Secret-3-286x400In 1995 a bunch of 90s models walked around in silky nightgowns. It was as boring as models in lingerie can possibly be.

Candice Swanepoel Victoria's Secret Fantasy BraWhile Victoria’s Secret did away with the flying angels and falling glitter, the first “fantasy bra” went over so well that VS is still spending tens of millions every year on sparkly bras that look just like what would happen if you gave someone a Bedazzler and a bunch of push-up bras. The first one was made of diamonds and cost just one million dollars. Last year’s bra cost $10 million and has a 52-carat ruby and won’t let the 1996 bra sit with it at the lunch table.

In 1998 someone decided to take “Angels” literally

Three years after the first Victoria’s Secret Runway show started, someone decided to take the “Angel” moniker literally and put these big feathered butt wings on model Karen Mulder. This is when it all started to go sideways.

In 2001 someone thought this was a good idea

Victorias-Secret-12-575x377You know how on America’s Next Top Model, the final runway show is always a crazypants physical challenge–the runway is under water! The runway is on fire! The runway is a giant hamster wheel!–and we’re all like, “No runways actually work like that, that would be crazy”? Well for one brief period in 2001, Victoria’s Secret flew the models over the runway on Peter Pan rigging. The only thing worse than that is all the “snow” falling from the sky, which probably resulted in every audience member having to throw her clothes away after the show.

The models fight over wings

2010 Victoria's Secret Fashion Show - RunwayThere are 47 models walking the Victoria’s Secret runway, and Adriana Lima says that during fittings they all fight over who gets to wear the biggest wings.

Chuck Bass is publicly begging for an invitation on Twitter

Normal fashion shows are full of editors, bloggers, and fashion interns with nice bosses, while the front row is full of celebrities, many of whom are getting paid thousands of dollars to sit there. The Victoria’s Secret fashion show is such a big deal that celebrities who would be paid to attend other shows have to resort to begging for invitations on Twitter.

The Victoria's Secret Fashion Show - ShowPeople often criticize the models for looking shrimpy or weak or like they could be knocked over by  breeze, but their physical strength would surprise you. Those wings are not light, and models work out for months before the show. Adriana Lima does boxing. I once saw a photo of Giselle casually toting her infant in a car seat slung in the crook of one arm like a handbag. I have the same model of car seat and a pretty small baby and thought that looked like a convenient way to carry her, until I picked it up and realized how heavy it was. Giselle is strong, and I wound up having to call a cab.

They have to do the show twice

Adriana Lima reports that the show is actually held twice. The models walk an identical show two times, and then the footage from both are edited together into what you will see on TV.

Some of the models are trying to beef up

2011 Victoria's Secret Fashion Show - RunwayWhile some of the models are probably detoxing before the show, some of them go the other way. Chanel Iman says she actually tries to gain weight before the show, because while her slight figure is very in-demand for the fashion runway, she says a bit of extra weight makes her look “sexier” for the lingerie show.

They will go through a ton of lip gloss

victoria's secret blow kissThe Victoria’s Secret makeup artists say they will go through 150 tubes of lip gloss for the show. That’s slightly more than three tubes of gloss per model, so I have absolutely no idea what they’re going to do with it.

And all the hairspray

2008 Victoria's Secret Fashion Show - RunwayThat natural, beachy hair looks effortless, but it does not happen on its own. The 47 models will use up 30 cans of hairspray. I like to think it’s because they’re making potato guns after the show with the excess.