How to Stop Puppy From Biting

Introduction
Why Does Your Puppy Want to Bite?
Point 1
5 Proven Tips on How to Stop Your Puppy from Biting
1 “Biting is wrong!”
2 Good Habits
3 Toys and Deterrents
4 Tone Down the Aggression.
5 Avoid Play-Biting

A large portion of the population today are pet owners. In that group, an even more sizeable chunk is that of the dog owners. However joyful the whole experience of having a canine family member may be, training the little pups can be quite a handful. Especially once they reach their teething stage and start nibbling and biting. Getting bitten by one’s own puppy is part and parcel of a dog owner’s life, but it is important to also teach it that biting is wrong. Looking for a well-behaved dog? Start learning how to stop puppy from biting right now! 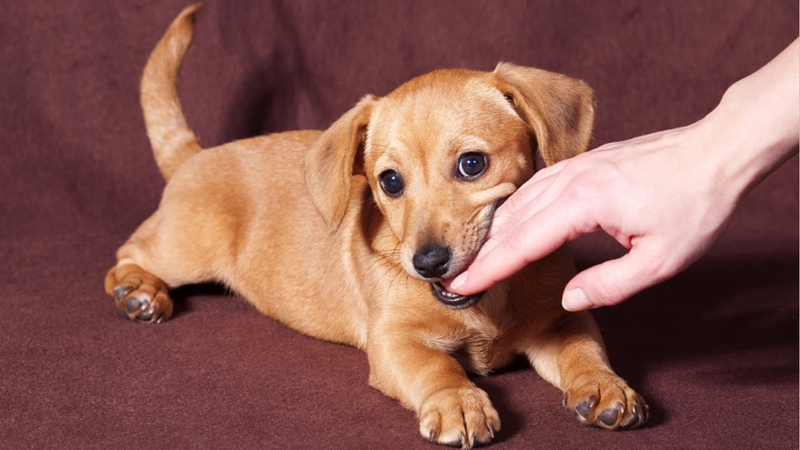 Why Does Your Puppy Want to Bite?

Puppies are just like little children. Raising them up to well-groomed companions requires understanding, tolerating and reprimanding them whenever necessary. Puppies usually first start developing the habit of biting during the “teething” period. As pups start growing teeth, it causes a niggling sensation in them that results in torn bedsheets and ripped sofa cushions. Biting is a completely natural process and you shouldn’t try to resist it too much. All you want to do is gradually make your dog realize that biting is wrong! Understanding them is key to knowing how to stop puppy from biting. A puppy doesn’t know its own strength, much like a small human child. So, it does not realize how hard it should bite, which is why its initial nips may hurt.

Usually, your pup just has playful intentions. It just doesn’t know what it means to play. So it is up to you to teach it right and wrong through your reactions. When the pup sees that you don’t appreciate being bitten (this can be achieved by ignoring your puppy for 20 minutes and letting out a yelp every time it bites hard), it will change its behaviour to suit the need. As you start gently “scolding” it for biting, the puppy learns to connect biting with your telling-off and ceases to do it further.

A puppy would also bite if it feels threatened or startled so avoid putting into such positions. Treat it with care and patience instead of getting aggressive. Aggression while training generally isn’t a very smart idea. Your pup might grow irritated and snappy; two traits that really don’t suit a dog! The key to stop puppy from biting lies in how you convey to him that biting is wrong, as we will show in the next section.

5 Proven Tips on How to Stop Your Puppy from Biting

This is also known as the bite inhibition technique. Basically what you want to get through is that biting is bad manners. Puppies learn right and wrong from their owners’ reactions. So the next time your pup nips hard, let out a high-pitched shout to startle it. This will teach it to relate biting with discomfort. Another way is to reprimand your puppy by not responding to it for about half a minute. This is especially effective because in such cases, it feels left out and will do anything to get you back: it’ll even cease to chomp down. After the mentioned interval, start playing with it again. Repeat the procedure if your puppy decides to go teething again.
However, it is also important to keep the positivity going. Pat or cuddle your pup if it pauses biting or comes to lick you. Patience is the key. You will need to repeat these steps again and again until results show. Finally, when you think your pup is getting the hang of it, gradually reduce your tolerance for each bite.

Inculcating good habits is a very basic element in stopping your puppy biting. Keeping it in the midst of other dogs teaches it to be friendly and social. Maintaining its walk routine is also massively important. In essence, a major reason why a pup bites is to get rid of the excess built up energy. Taking it on walks would help expend this energy. In short, a tired dog bites less. Needless to say, a hungry dog is a snappy dog. Keeping its nourishment levels up along with exercise is ideal for your pup to develop a generally happy mind-set.

Before you start playing with your puppy, apply deterrents like the “bitter apple spray” to parts of your body where you think the pup is most likely to bite. If it does bite later, the sharp taste of the deterrent will have its effect and make your pup averse to biting you. Another way to help the pup overcome its teething phase is by letting it play with rubber toys. If it seems suspicious of the toys, just apply some of your dog’s favourite sauce to make it more attractive.

Tone Down the Aggression.

Avoid being aggressive. At all costs. Dogs respond to kindness and love more than almost any other creature. Slapping or hitting your puppy in exchange for biting will either plant a seed of fear for you in its mind or cause it to think that you are playing and bite even harder. You don’t want either of these to happen. Being non-responsive is a far more effective punishment because dogs hate feeling left “out of the pack” and it’ll soon stop biting in order to gain your favour.

This method is crucial for knowing how to stop puppy from biting and is used in combination with redirection. Use chew toys to redirect your puppy’s attention from your hand, and this will result in your receiving less bites during the course of playtime. Deterrents, as mentioned above, help a lot in this respect. Praise your puppy every time it goes for the toy instead of your hands. This will teach it what to do when it wants to bite instead of actually biting!