How to Stop a Dog from Marking

One of the perennial problems of dog owners is the annoying marking behavior of their dogs. For dogs, this is just a way of life. For owners like you, the scent of urine around the house is a big nuisance. To keep the peace between you and your pet, it is important to know how to stop a dog from marking. How do you exactly do that?

First, you must understand why your pet is inclined to mark every corner of the house. Second, you must know how to stop the act. In this article, we are going to tell you exactly these. 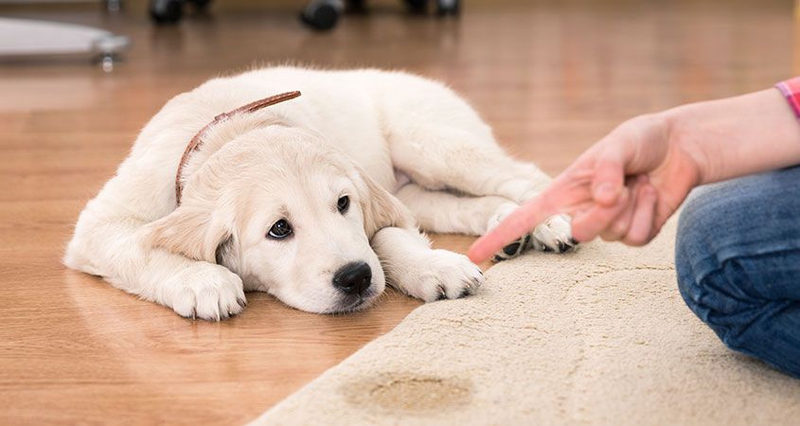 Dogs are territorial animals, and marking their territory is a habit that remained from their days in the wild. Humans erect fence to keep trespassers from crossing into their properties. Animals like dogs, in the absence of useful hands and intellect to erect fence around their territories, rely on their natural body scents to announce to other animals their territorial grounds.

Not only that, but marking plays another role in the animal world side from simply announcing the boundaries of their territory. By leaving their scents, through body excretions such as urine, male animals announce their sexual availability to females who happen to take a whiff of their odor.

With wolves and dogs in the wild, the job of marking the territory falls on the pack leader. What this means is that the highest ranking member of the pack goes around the entire territory and urinates on every tree and bush that he can find to warn other packs to keep off their property.

Though dogs have become domesticated thousands of years ago, and your own pet might not have even smelled the wild all its life, instinct still plays a big part in their habits. Instead of the mountains, their territory is now your house and lawns, and it is their job to warn other dogs from trespassing into their hunting grounds. The result of this confusion is, of course, the suffocating scent of urine around the house.

What you see as your dog’s laziness to go out to relieve itself is actually a deliberate attempt on its part to mark the area. And for your dog, everything around the house is fair game – sofa, cabinets, bedposts, the walls – just about anything where it can squirt its urine.

Learn How to Stop Your Dog from Marking

Now that you have understood the reason for your dog’s annoying marking behavior, it comes easier to stop your pet from doing that again. Here are a few methods we have selected, which have proven to be quite effective.
1

Be the Pack Leader

Sexual maturity is another cause for marking. It’s your dog’s raging hormones that trigger the need to announce his sexual prowess to all the females around. Neutering your dog prevents it from attaining sexual maturity, so it doesn’t have to mark just to satisfy its sexual needs.

Cleaning your dog is simply not enough. A whiff of its own urine will trigger instinct to remark the area. What you need to do is totally remove the odor by using a tough disinfectant or an enzyme deodorizer.

Training your dog to obey your commands is the most effective way to stop your dog from marking. Establish a command that your dog will immediately recognize as an order to stop whatever it is doing. One dog owner uses a can filled with small pebbles to call the attention of her dog. Every time she senses that her pet is getting ready to mark an area, like when it is circling its mark, she shake the can loudly to interrupt her pet’s annoying habit.

Other dog owners use positive reinforcement as an effective way on how to stop a dog from marking. What they do is sternly call the dog’s attention when they catch it marking around the house. If they catch it before the dog urinates, they simply tell the dog to stop. Obeying a command means that it is going to receive a treat.

Belly bands are like baby’s diaper that holds the urine in place. Just wrap it around your dog’s belly like a normal cloth diaper. Once it urinates to mark an area, the band will hold the urine, but unlike a regular diaper that totally absorbs the wetness while keeping the baby comfortable, the dog will feel the wetness around his belly. Dogs don’t like being uncomfortable so it won’t be inclined to mark around the house knowing that it will be wetting its belly.

Introduce New Arrivals to Your Dog

Be it a new cat, a new dog, a new roommate, it is important for your dog to get acquainted with new faces around the house. One way that your dog’s territorial instinct is triggered, is when it feels threatened by someone new. We often mistake this behavior for nervousness, but it’s entirely different. The entry of something, or someone, unfamiliar will get your dog to reaffirm its ownership of the territory and so commence remarking the area. To stop this behavior, slowly introduce the new arrival to your dog and wait until the two have become properly acquainted before letting the stranger loose inside the house.

If after all your efforts, you have failed to curb your dog’s annoying marking, it is time to enlist the help of your veterinarian. Talk to your dog’s doctor about how to stop a dog from marking. Sometimes, there are underlying health and behavioral issues that we fail to recognize that only the trained eye of a professional can detect.