For the ultimate fans of cucumbers, who want to grow them at home, the process is highly rewarding. The taste, for one, is completely different and you can eat them fresh without having to buy the engineered vegetables from the market.

Cucumbers require a lot of vertical space, so growing cucumbers in a pot can be tricky if not done with proper knowledge. If the proper variety is selected, with less stringent height requirements, then the process is quite easy. The soil needs to be warm and nutritious and the pot needs to be kept moist. Read on to learn all you need to know about growing cucumbers in containers and tips on caring them. 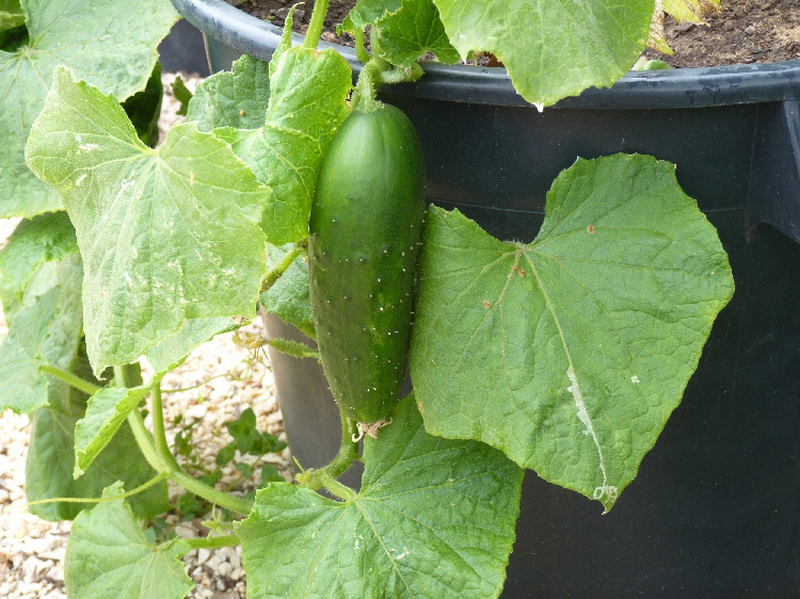 How to Grow Cucumbers in Containers

1. Selecting the right variety: vine varieties require much more height than bush varieties. Hence, bush varieties are easier to grow in plants whilst vines need trees to climb and hang on to. The varieties recommended for home growth are:

2. Choice of container: the bigger the container, the better it is for your cucumber. Bigger pots will hold more soil and retain water longer.

3. Drainage holes: cucumbers love water. The water is essential for their growth. But too much of anything can cause harm, so proper drainage is crucial. Plastic pots that can retain water with a couple of drainage holes are the best option for growing at home.

4. Cleaning the pot: always clean the pots when changing plants and in this matter, when growing cucumbers. There can be hidden bacteria or insect eggs that can cause great harm later on.

5. Quality of soil: the soil quality needs to be top notch for good growth. Organic potting soil or potting mix, without added chemicals and agents, will give you the best naturaly tasting cucumbers. Be sure to check if your soil has any fertilizers, pre added; you don’t want to overfeed the plants with nutrients.

1. Sow your seeds only after the weather becomes warm. The soil must be at least 21 degrees Celsius for the cucumbers to grow. The crop will be sown in June and harvested around September in the United States.

3. Potting mix:  the pot should have a potting mix around the stake. It should not be too densely packed, since the cucumbers need room to grow. The soil and pot rim should have about an inch of space between them.

4. Fix the steak: the steak shouldn’t move around. If the stake wobbles you should make the potting mix denser. An unstable steak will cause the whole plant to fall.

6. The hole should be filled with six to eight seeds. Don’t plant more seeds than you have space, else the cucumbers will thin out. Planting less than 5-6 seeds will greatly reduce your chance of success.

7. The hole should then be covered with the potting mix. Be careful not to squeeze the seeds in too tight. It is best to loosely drop the soil over the seeds.

8. The watering of the seeds will take place next. Make the soil moist and make sure the water reaches in deep. Do not, however, let puddles of water form.

9. Mulch will prevent the soil from drying quickly. Spread a thin layer over the topsoil.

10. The pot should be kept in sunlight. Warm and bright conditions allow the cucumbers to grow well.

11. Set a trellis to provide for future growth if needed. The trellis needs to be sturdy. Once covered by cucumber vines, the trellis is subject to a lot of wind resistance. The container, thus, needs to be protected from the wind and placed in a spot where there is limited exposure.

How to grow container cucumbers by Nurse Amy: everything you need to know about growing cucumbers in containers

This is crucial for cucumbers. They need about 6-8 hours of sun every day. Do not use random estimations or guesses. Use a sun calculator or time the exposure accurately. Your plant will need the right amount of sun in order to grow rIght

Cucumbers feed heavy. Be sure to add minor amounts of fertilizers every week, especially during growing season.

Be sure the soil is moist, not wet. The soil must be kept moist, deep so that moisture can reach the roots. The water should also reach all of the plant and be retained. Watch out for the sides of the soil to make if water is leaking or being absorbed.

Warm temperatures suit cucumbers the best. Around 21 degrees Celsius is the ideal temperature for cucumber growth. Use pots that retain heat like black pots and Earth boxes.

Cucumbers grow quick. They can grow to full height in a matter of days. Do not let them overripe or they will become bitter in taste. Cut them off rather than pulling so you don’t damage plants. The more you harvest, the more you will get in return.

Watch out for pests

Be careful of garden pests. Worms and mites target cucumbers. Organic pesticides like neem oil should be used to drive away these pesky creatures.

Bacterial wilt and Mildew are very common in cucumbers. Anti fungal products should be used to rid plants of Mildew but bacterial diseases may be harder to get rid of.

Harsh winds can destroy your cucumbers even though a little wind is good for them. You can place your plant near the fence or the side of your home to make sure the cucumber has ample protection from wind.