Who doesn’t love eating a snack when bombarded with a tasty cheese sauce? Yes, cheese sauces are the best add-ons one can ever have for yummy snacks. But have you ever tried making cheese that drools sauce at home? Although many ladies goof it up, it’s really very simple how to make cheese sauce. There are different types of cheese sauces that you can experiment, according your own custom requirements. The best part on learning how to make cheese sauce at home is the flexibility of the taste, which you can adjust according to your appetizing tongue. A simple cheddar can be utilized in any of your delicacies, while jalapeno jack adds a special flavor to the foodstuff.

You can also opt for the creating a goat cheese that has the history of adding sense of taste to distasteful foodstuffs. Learn how to make cheese sauce & put forward the next step of becoming a master chef. You can create your own cheese sauce for potato skins. Nachos, burritos, broccoli or any other delicious evening snack. It doesn't matter what type of cheese sauce you prefer to create, just making it yourself is a big deal enough. Making cheese sauce can be quite fun as it can augment the taste of ‘any’ foodstuff. When it turns out to be yummiest of creations you made, making cheese sauce will make you feel like cooking expert.

Here are the seven recipes you can make after you learn how to make cheese sauce. 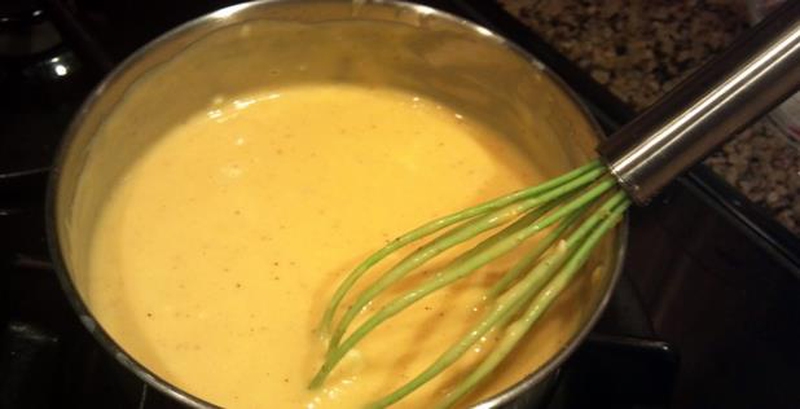 How to Make Cheese Sauce for Nachos

The ingredients that you will require would be two tablespoons of butter (but no margarine), similar amount of flour and half-glass of milk. Take around 8 ounce of Velveeta i.e. one-fourth of the normal Velveeta packet. Put the butter on low flame until it becomes liquid. Always keep the gas flame low as the butter can start bubbling, and ultimately burning. Stir the now-melted butter liquid at regular intervals. After the butter has melted completely, put the flour in it. Mix butter with the liquid so that it forms a paste, but not a thick one. This paste is known as roux. Add the milk to this roux and let it remain on the low flame. Stir the roux and milk so they are efficiently mixed. Stirring the sauce will avoid it sticking to bottom of the pan (which happens in no time). After that, add the Velveeta in the mixture and again stir it repeatedly until the cheese has melted completely.

That’s it! You get a yellow liquid in the pan that can get vanished in no time when served with nachos.

We just hope you have learnt how to make cheese sauce for nachos now. Have you?

How to Make Cheese Sauce for Broccoli

About learning how to make cheese sauce for broccoli, there are different methods according to different chefs. Making cheese sauce for broccoli is quite same as making it for nachos. The addition would be broccoli to be put in boiling water and pinch of salt be added to it. It needs to cook on low flame until it becomes tender to absorb the cheese sauce. The cheese sauce can be made similar way how it was taught for the nachos: Melting the butter and adding some flour in it. After making the roux, adding milk very slowly while continuously stirring the blend. You might need to add a bit of salt in it again, apart from broccoli. When the cheese melts, the sauce in ready to be placed over the soft broccoli.

How to Make Cheese Sauce for Pasta

Yummy! It got my mouth watered bust imagining about delicious pasta or macaroni served with a cheese sauce. On a trip to Italy, always have pasta as your staple snack. If you are an ardent foodie, you might cravings for this Italian recipe, and learning how to make cheese sauce for pasta must always been on your mind.

Yum! Didn’t you get hungry at the mention of pleasant pasta?

How to Make Cheese Sauce for Sandwiches

Well, sandwiches are the most common snacks used with cheese pasta. How to make a cheese sauce for sandwich doesn’t require any special deviation from the standard making. But yes, there can be many customizations like you can try without milk or flour. Eating sandwiches without cheese sauce doesn’t change its taste much, so any experimentation while making cheese sauce can be served with sandwiches.

How to Make Cheese Sauce for Burritos

How to Make a Cheese Sauce for French Fries

You can make French fries at home in no time. Just chop the potato sticks & fry them with a bit of spice. Making cheese sauce for French Fries can be amalgamated together with the said delicacy. The French fries, most common go-to snack for all, is truly irresistible with cheese sauce. Serve the recipe while watching an exciting game and that would relish the moment.

How to Make a Cheese Sauce for Burgers

There are different types of burgers and accordingly making cheese sauces for every particular type is interesting stuff. On general terms, the regular cheese sauces might suffice for any type of burgers unless you don’t go for exotic foodstuffs.

Any snack automatically gets tastier when it is provided with a cheese sauce. Be it nachos, broccoli, or a burger. The super taste of that yummy snack lingers our mind for quite some time when it is served along with a cheese snack. For some, a cheese sauce makes the item really worth it. If you enter Subway or McDonald’s, all you ask for that extra cheese sauce as you can’t really resist the temptation of taste. If you know how to make a cheese sauce at home accurately for particular foodstuffs, whatever you make for a refreshing evening snack will turn finger-licking tasty by default.